I was born and grew up in north Jersey, in the town of West Paterson. Most people haven't heard of it. It's nothing spectacular really, just a typical north Jersey suburb. About 20 years before I was born it was sort of the middle of nowhere. My grandparents who moved there in 1958 said that if ever a car passed by their house, they would usually stop and ask directions because they were lost. Twenty years after I was born, there was hardly an open plot of land except for a few parks. Everything else was filled up by houses, mini-malls, and condos - pretty typical for that part of the world. Lately it's gotten pretty busy and house prices have shot through the roof. I certainly couldn't afford to live there now. Heck, I don't know how half the people there do it!

There's not much to say about growing up. I spent way too much time as a kid watching television and playing video games. That's probably the reason I wear glasses now.

Once I got to high school I finally started doing some interesting stuff. I took a course in BASIC programming and really liked it, and ever since then probably my favorite hobby has been writing computer programs. The fractal program I [used to] describe on this site is probably the longest program I've written. I've written a lot of small games and other stuff. Lately, I've decided that the reason I like to program is the same reason I like math - something about figuring out how to do something and then doing it in an efficient way. It's like solving a puzzle. I also started listening to a lot of music and playing the guitar and bass in high school. It took a long time for me to get to be any good at all, and I'm still really not very good. I never took any lessons, mostly I just played around to amuse myself. I ended up playing in a band with my brother call Ill-advised for a couple of years. We played a few shows around the area, and it was cool to look out at the audience and see people getting into the music, but I make a really boring rock star. I used to bowl a lot when I was in high school, too, and used to do pretty well for myself, but I'd say in the past 5 years I've only bowled maybe a handful of times. I can't throw the mean hook anymore like I used to.

I went to college at Montclair State University in north Jersey. I was there 6 years. I was a physics major from the start, and that's what my degree is in. However, about 3 years in, I figured I was in some trouble because soon I was going to have to go get a nine-to-five job, and I really didn't want to. I liked school, so I figured I'd go to grad school, but I didn't really want to pursue physics any further. I didn't really have that much of an aptitude for it. About a year earlier, the professor of the mythology class I was taking passed around a handout about how you could do a minor in classics just by taking courses that satisfied other requirements. I thought that was really a great idea, and so I took some courses in classics, including Ancient Greek, which I really liked and picked up on pretty quickly. After that I really got into classics and completed a major in it, and I considered going to grad school for it.

Around that time I decided I really liked math. I certainly wasn't one of those people who always liked math. In fact, I got C's in 5th grade when we did fractions (I don't know why, because they really are so easy!), and again in 10th grade geometry, and I just skated by in Calculus my freshman year of college. However, my 4th year of college I took a course in Linear Algebra, and it came really easily for me. Also, of the professors ran a bi-weekly math contest, which consisted of answering a fairly challenging math problem (at least it was for me), and the top 6 finishers would get a prize (math book). So, I decided I liked math, and took a bunch of math courses and liked them, and then applied pretty haphazardly to grad schools, and ended up going to Lehigh. I've been there ever since. This is my fifth year. Things don't come all that quickly to me, so I really have to work at it, and really I haven't had much time to do anything other than math for the past 5 years, except in the summers when I really don't do any math. (Usually what happens is I take a week off after the semester ends, and after that it's really hard to get back into the swing of things.) I've taught and TA-ed for a whole bunch of courses now, and taken a whole bunch of courses, too. At some future date, I'll have more to say about grad school, but right now it's getting late and I'm getting tired. I've been messing around learning css and trying to get this page to look nice for about 8 hours now, and I'm just about done, and I really should get back to writing my thesis. More later, whenever that is...

Well, that up there was written about 6 months ago, while I was in grad school working around the clock to get my thesis finished up. Since then, I finished the thesis and graduated and got a job teaching math here at Mt. St. Mary's University. I also got married.

So here's what I did in grad school: Most of the time I just scribbled around on some paper like this.

After some miracle or other, it turned into this. 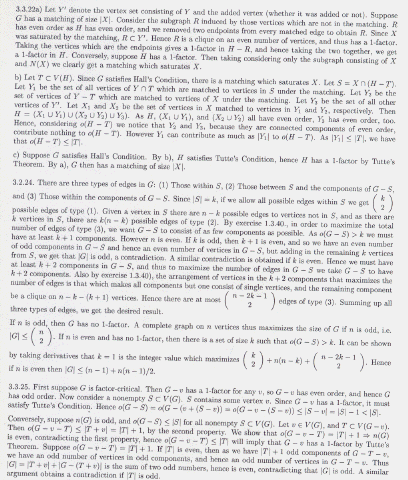 This has been up on the web for some time now, back from when I was taking graph theory at Lehigh in 2003, and in fact, if you look closely enough you might even be able to find a mistake or two...

Well, six more years have passed. I've been at Mount St. Mary's for those six years. I'm now Associate Professor. I've taught a ton of different math classes as well as some computer science and five years of Freshman Seminar.